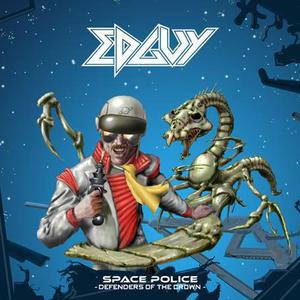 Space Police - Defenders Of The Crown

Defenders Of The Crown

The Realms Of Baba Yaga

I may like New York, Bavaria or Paris
But nothing compares to you, England
Cause England's got Steve Harris

England, I know
I may have explained it somewhere before
But I swear it wasn't my idea to contrive that silly way
OK, I've got to admit this was, uhm, an improper try of a joke
But it rhymed and talking humour:
You've got to know I'm just anosser German bloke

Who loves afternoon tea
And Bob Catley and Mr. Bean
Who loves to but miniature phone booths
And cute little snow globes raining snow
On a cute little queen

Mostly you're jolly
At times you're frustrated, England
Then rest assured:
I also think penalty shootouts...
...are highly overrated

Vienna has got Mozart
Chopin they had in Paris (kind of)
The Catholics got the Pope
England's got The Beatles
And eve more so:
England's got Steve Harris

England's got Steve Harris
And as if that was not enough for you:
England's got Bruce Dickinson
And on top of it the other ones...
...in Iron Maiden too, yes, it's true

Vienna's got the Mozart ball
The Frenchies they got Paris

I may like New York, Bavaria or Paris
But nothing compares to you, England
Cause you got the magic bullet
England's got Steve Harris

England: inventors of Def Leppard...
Shakespeare...
Indian food... Gary Lineker...
That bloke who did away with Braveheart
Et cetera... and so forth... good night