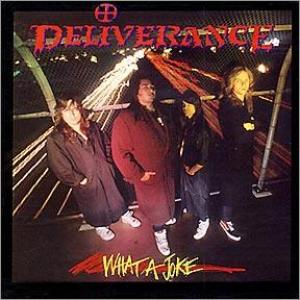 A Product Of Society

What A Joke Lyrics

I'm so tired of all this guile
Homo's saying they're not perverted
it's an alternative lifestyle
law enforcement, politicians and businessmen
these days with most of them
corruption is a synonym
we fight this battle not against evil
against those who think they are good
I've not stolen, murdered or destroyed
God will let me in!

Want to be intellects spew
"There is no God"
Proving themselves fools, liars and frauds
remnant prays this battle against evil
against those who perceive they are right
They've not stolen, murdered or destroyed
God must let them in!

What a joke
God will laugh at their calamity
What a joke
He will mock when their terror comes
What a joke
Despising knowledge, choosing not to fear
What a joke
Complacency of fools will destroy

You know it's like a certain lady said
"You're god, I'm god, we're all god, all religion is good, all paths lead to the same
destination.
Yeah, the Judgement Seat of Christ

I'm an atheist, I don't believe in God.
Yea, well God doesn't believe in atheists
Well everybody knows the Bible is full of contradictions
Your ignorance is what the contradiction is, why don't you show me a couple, we'll deal with them.

I'm going to party with all my friends in Hell.
Not even worthy of an answer
The world is at least one hundred million years old, you know, where does that leave your Christian Bible?
Well carbon dating has also been proven wrong by showing that living things have been dead for thousands of years

How are we supposed to know if there is a God if we can't see Him?